Ziggy the Wiener Dog’s cremains had been ready for pickup for several months. For three months, in fact.

“Do you want to pick him up?” I made the rare call to him to ask.

“All right. You okay with waiting?”

And I took my time. After wading through the raw emotions when I picked up Scarlet the Wiener Dog so immediately after her death, I learned my lesson and took my time in carrying him home. I wanted to be ready. I waited. I waited months. I waited until the trees blossomed, and then after the blossoms fell.

I picked him up a couple weeks ago, my grief long processed in a grueling succession of bad news after next. He was in a box. A small box. He was a good dog until the end, always low maintenance and accommodating. His life with me bookended an amazing chapter in my life.

I adopted Ziggy a couple months after my fiance broke off our engagement–there he was, a trembling little dachshund in my life. It was February 1998, in the middle of a rainy El Niño season; he had been found wandering the streets with his sister-dog. I was alone, too. Next year, the fiance and I got married.

I had no idea what would happen ten years hence, but I knew I would have a dog. He ended up being my constant for fifteen years. And he died a week after my husband asked for a divorce. If I had made this timing up and workshopped such a story, I’d be criticized for being too “device-y” and the timing too coincidental. But it happened. He came and went with my marriage like a wedding ring.

Ziggy just–died one evening. He rose, teetering, from his bed. Since Scarlet died, he spent a lot of time in that bed, napping.

We were sitting in the den, playing with my baby before bedtime. I looked over. Ziggy was not walking straight. He had trouble standing. “Yes,” I said. So much had happened in 2013, I didn’t want to look yet another other Bad Thing in the eye. So I looked away. “I think he’s dying.”

“Really? What should we do? Shouldn’t he go to a vet?”

It was 7pm. He would have to go to the emergency vet. I shrugged. “I don’t think there’s much we can do. I’ll take him to the emergency vet. But he’s probably going to die.” I know I sound cold, but if you were there, you’d have heard the pathos in my voice. Also, I’d given up on all good news by that point.

I emailed my husband. I typed, If you want to see your dog, you should come see him now. I don’t know if he’ll live another week or another hour, but now’s the time.

So much had already happened.

I drove Ziggy to the vet, about 5 miles away, across town. The drive took the length of an Adele song, “Someone Like You.” At some point during the drive, my husband called.

Yes, I said. Your dog is dying. Where are you?

Far away, he said.

Ziggy stopped breathing as I handed him over to the pet emergency veterinarians, a team of UC Davis doctors who then asked me, “Do you want us to resuscitate him?”

“What’s happening?” I could hear the husband on the phone. This intertwining of my lives. The present, the past, the near and the distant.

“Probably from a heart attack or stroke. My guess is a stroke.”

And then my ever-stoic husband started crying.

So much had happened.

My life was officially a country song. 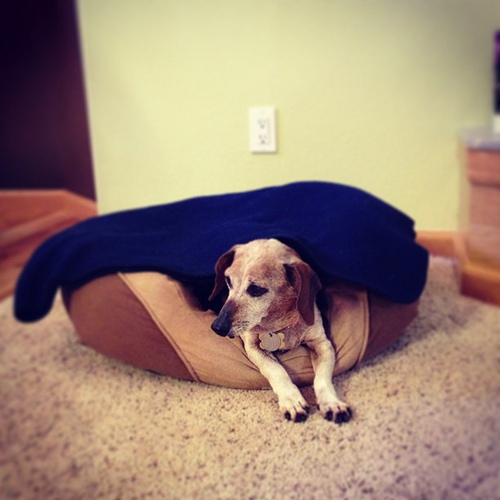 Joining Heather’s Abecedary, Fog City Writer, and other writers like Susan Ito in working through the alphabet with short, memoir-like pieces. Except I’m going to go in reverse, beginning with “Z.” It’s called Alphabet: A History.

Filed under Alphabet: A History, Life, Memes, The Personal

Tagged as Alphabet: A History, death